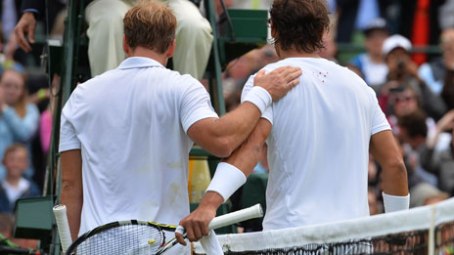 Nadal is out – a mix of an inspirational performance from the 135th ranked Belgian, Steve Darcis and clear limitations in Nadal’s mobility.  There were occasions when Rafa pulled up short or didn’t chase balls that in full fitness he would have made.  Darcis rose to the challenge of playing against the man some pundits tipped as a pre-tournament favourite.

Nadal, even in defeat, demonstrated his class as player.  Based on the maxim that if you’re on the court you’re fit enough to play, despite being clearly hampered at times, he made nothing of it, nor did he retire when some would have. When the match had finished he waited for his opponent before leaving the court and still had the courtesy to sine autographs for fans on his way off the court.

So what of the other contenders today? In the men’s draw, following the age old tradition of the defending champion starting proceedings on centre court, it meant that in the men’s draw those who played were in the bottom half of the draw.

Federer strolled against Hanescu – despite doing everything right Hanescu (I think he only missed one first serve in the first set) encountered Federer in sublime form, hitting the ball sweetly to the point of playing exhibition tennis.  I’m not sure that it tells us much other than Federer, at the grand old age of 31, is still a contender, though should he reach a semi final against Murray or Tsonga the dynamics will be significantly different and both have had convincing victories against him this year.

Andy Murray played solidly in brushing past Becker and Jo-Wilfred Tsonga beat the excellent young Belgian, David Goffin, in straight sets.  Despite playing some excellent tennis on grass (Goffin had had a good run at Wimbledon last year) Jo-Wilfred always had a bit too much – he not only plays with power but also has excellent touch for a big man. It could be an interesting quarter-final match up against Murray.