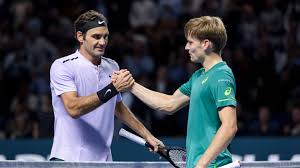 It certainly comes before the outcome.  In the semi finals of the ATP Tour Finals Federer did not perform sufficiently well against the improving David Goffin.  While he took the first set with ease, Goffin was increasingly aggressive in the second set and Federer started missing that usually reliable forehand, the one that normally has the attributes of an exocet missile!

One sports journalist argued some time ago that Federer’s beautiful game was a consequence of his assassin like approach to winning.  In contrast, the same journalist in another article described how Johan Cruyff wanted to play beautifully, for which he wanted to be remembered, both as player and manager. I believe it’s evident that incredible athletes like Cruyff in his prime and Federer worked incredibly hard to achieve a level of performance that has been awesome in it’s beauty (with Federer this is still the case). At the O2 over a week ago he may have lost but for much of the match the quality of tennis was outstanding, particularly given it was the end of a long season when players are undoubtedly a little tired.  The final the following day between Dimitrov and Goffin also proved to be a high level and close contest between two of the slightly younger generation of players.

In sports psychology there is a common ordering of process – performance – outcome.  For a particular outcome, or end result,  you need a certain level of performance and therefore you start with the process you need to go through to achieve the performance.  However, perhaps it should be prefaced by preparation, though some see this as part of the process.   Though in tennis terms the process usually describes what the player goes through prior to and during the match – this includes the vital routines that players go through between points that enable them to tune out of the previous point and re-focus on the next.  Then, of course, if the performance is better than your opponents the outcome is a victory.

Preparation includes ensuring an athlete is in peak shape to achieve the performance, as well as practice to develop the ability to execute shots consistently in a range of contexts.

Of course, in the world of work, we rarely give significant consideration to preparation, process, performance but all too often focus purely on outcomes.  While delivering the right outcome is critical by neglecting the steps to enable high levels of performance we are inviting mediocrity or even failure – a deep irony in the world I’ve spent much of my time on where failure is not tolerated.

Much of knowledge work is based around meetings and personal interaction, yet how often do we just wing it?  Most of the firms that I have worked in over the last two decades or more, senior managers often spend their time going from meeting to meeting, with little opportunity to prepare or reflect on the outcome.

This, in conjunction with the pervading culture (top down directive) in many large established corporations is an inhibitor to performance and of innovation.  This is in contrast to top athletes who will continually experiment to improve.

One of my more recent roles was establishing an innovation function at a large bank.  I’ve also been to a number of innovation events focused on financial services in the last year – one theme that consistently crops up is that of culture.  The pervading culture – hierarchical and top down directive – is seen as a barrier to innovation, quite rightly.

Lots of folks want to be involved in innovation or fintech – it’s cool – but getting folks who’ve spent their lives in these hierarchical cultures to change the way they think and behave is a major challenge.  There are good reasons and being like Google is not the answer!

Next time …. Why being like Google is not the answer! 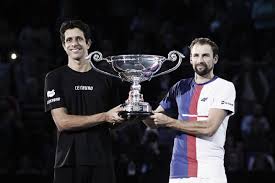 I was hoping an end to this tennis year would result in a final at the ATP tour finals between the two outstanding players of the year and possibly of all time, Federer and Nadal.  Especially as I’ve got tickets for the final!

However, while Federer continues to show that at the grand old age of 36 that he can still outsmart the new kid on the block, Zverev, it was sad to see a Nadal, half a yard short on pace on Monday lose to David Goffin and end his season.

One of my rants this year has been to see top players, particularly amongst the women, playing drop shots and staying back. It’s not only the women but some of the men.  When you play a drop shot, good or bad, unless the other player has no hope of getting there, following it in to the net is the smart play.  It’s something that Federer and Nadal just about always do.  In doing so, if the other player only just gets to it you’re likely to have an easy put away and if it’s a poor drop shot at least by coming forward you reduce your opponents options.

Watching some of the matches at the US Open earlier in the year I was shocked at how many drop shots  were played and the player stayed at the back of the court, particularly in some of the later rounds in the women’s singles.

Of course, how we play is contextual, determined by the style of play of our opponents, our own capabilities, whether we are playing singles, doubles, etc.  It was great to see Melo and Kubot awarded the year end doubles number one trophy after their win on Monday night. It followed a routine but well executed win against Granollers and Dodig.

When next watching top doubles players, observe player positioning and serve placement. The vast majority of serves are played down the middle or into the body of the receiver.  Serving out wide in doubles, unless it’s an ace, gives the receiver too many options, particularly exposing your partner to being passed down the line. Top players will, most of the time, aim to control the play when serving by compressing play down the middle of the court.

I was asked on Monday why doubles players touched each other between points. It’s not congratulatory, as it happens whether the point has been won or lost but it’s a routine  and, like many that are now taught in tennis, it has a purpose.  In doubles it primarily emphasises the connection between the players and hence the team element, the players are in it together and the best doubles teams retain constant communication and contact.

While running a large programme team at a large investment bank a few years ago a young technical analyst asked me, referring to some of the senior management of the bank, why such seemingly bright people seemed to lack common sense! The programme had been a basket case and we subsequently turned it around despite the behaviour of some of the people round us.

There was a telling interaction between myself and the analyst not long afterwards that revealed something of the cockeyed culture of the environments we sometimes have to work in. I was on a rolling three month contract and, having restructured the programme and overseen successful deliveries, I informed the bank that I would not renew the next time.  The analyst in question indicated a certain amount of dismay at my imminent departure. When I pointed out that my replacement was highly capable and things were in much better shape he said he understood but that he was bothered because I cared! Now I consider myself a normal human being but not significantly more caring than the next individual, so I asked why he thought that.  He said that every time he saw me for the first time in the morning I said ‘good morning’ and asked how he was and also said good night when he or I left.  I was a little startled, as to me this is normal human behaviour but on questioning further it appeared that previously team members rarely spoke, communicated mostly by email and pleasantries were rare!

It’s not the only time I’ve encountered poor basic communication at all levels in a work context but without getting such simple basics right how can we ever expect to build cohesive teams?

Like players making brief contact with each other in doubles between points, these may seem trivial or minor points but they are an element that can make a significant difference to the functioning and cohesion of a team.