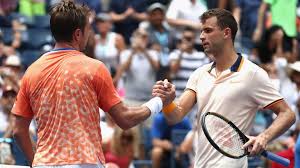 Yesterday Stan Wawrinka, on the long road back from injury, beat Grigor Dimitrov, 8th seed at the first round of the US Open.  It was a tough draw for Dimitrov, Stan is one of only five men to have won more than one singles grand slam title over the last 15 years (Feder, Nadal, Djokovic and Murray are the others).  Stan like Murray has won three, all under the guidance of coach Magnus Norman.

Norman has returned to Stan’s team this summer.  Norman, a former world number two singles player has justifiably built a reputation as being one of the world’s great coaches.  He has played at the highest level and has worked hard to develop his coaching skills since retiring as a player. He coached Robin Soderling, seeing him reach two slam finals and has been with Stan through his three grand slam wins.

On the other side of the court, Dimitrov is seen as an outstanding talent, who has not really fulfilled his early promise.  In Dimitrov’s box was Dani Vallverdu.  Dani was a promising junior, who was coached alongside Murray at the Sanchez-Casal Academy in Spain.  They became firm friends and, while Dani never made it as a player, he joined Murray’s team as a hitting partner.  Dani will have learned much working with coaches like Lendl, Corretja and Cahill and has subsequently had short spells with Berdych and now Dimitrov.  At 32 he is still developing as a coach.

Great coaching is principally learning to ask the right questions, collaborate with the player to get to a better place.  Norman is undoubtedly an outstanding coach.  Being a mentor is a different role, often seen as sharing experience with the player – which may or may not be relevant, as the player may not be in the same situation as the mentor has experience of.

We have worked with financial institutions and emerging companies in the innovation space over the last couple of years. We see many fintech ‘mentors’ – some good, some peddling a bit of experience in financial technology, but many only with low to mid-level delivery experience opportunistically using the term fintech and presenting themselves as experts.  While there are some with genuine expertise, some demonstrate significant gaps in their expertise – they are suddenly experts in how to grow an idea into a real business.  With experience comes the capability to cover relevant areas, including rigorous competitor analysis, product positioning or, most significantly plan for success. This involves ensuring the right leadership is in place, there is a clear vision, the culture and operating model framework is in place to facilitate growth.

Good coaching is incredibly powerful with the right coach and in the right context, being a mentor and providing expertise can also be valuable but there  is a need to be aware of the expertise and limitations that the mentor brings to the party.