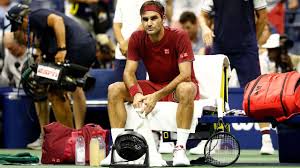 However, when you’re Roger Federer, losing to the number 55 ranked player in the world when you’re the odds on favourite to win may feel like a disaster.  Especially when Roger had supposedly prioritised the US Open as a target slam to win this year.

Federer was clearly troubled, the conditions were difficult but the normally calm Swiss seemed particularly bothered at a relatively early stage by what was only a normal New York crowd.  Flushing Meadow does not have the serenity of Wimbledon and Federer knows it and normally seems to relish it, after all he’s won there five times.

Federer unusually let it get to him and it impacted his performance – a player who rarely serves a double fault served 10, his first serve percentage was inordinately low – 49% overall and in a long service game at the start of the second set just 25%.

Of course, challenging conditions happen to us all in a work context – we can’t always choose what happens to us but we can choose how to react.  This is more easily said than done – interactions with work colleagues can be emotive and challenging.  However, the challenge for us all, like Roger, is to stay present and when we do have a bad day at the office put it behind us and move on.

Of course, all credit to Millman though for executing his game plan and winning through to his first ever grand slam quarter final.