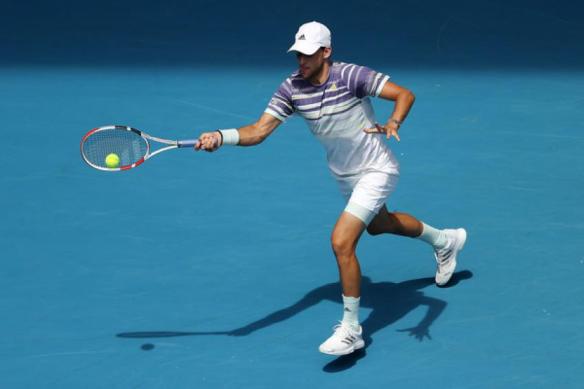 Dominic Thiem has just beaten Rafael Nadal for the first time in a slam, reaching the semi-finals of the Australian Open, where he will face Alexander Zverev.

We often hear how failure is not something to be feared and we should aim to learn from it.  However, we should also look to learn how we can improve when we succeed.  We should celebrate how well we perform in success and indeed, in Thiem’s case he was the better player for most of the four sets – it’s rare that someone can dominate Nadal off the ground in the way that he did and it was an impressive performance.  However, following success we’re often in a more receptive state to conider how we can improve.

When serving for the match in the fourth set Thiem clearly got a case of the elbow!  Tightening up in key points – although it’s often referred to as getting the elbow, in Thiem’s case it was principally in his movement – in two points in that game his movement, which had been exceptional throughout, was the main issue as he got tight and cramped, hitting the ball too close to his body and missed his normally reliable forehand.

It is so tempting both in sport and at work to judge a performance by the result.  Yet we can perfrom at our best and lose, similarly we may go for a job and however good we are someone may be better suited.  Whatever the outcome we are human and imperfect and there are always ways we can improve.

I remember some years ago turning around a significant business change programme for a major investment bank, where almost everything that could have gone wrong had done so.  We coached a team that had been seen as a failure, building a cohesive, high performing team that delivered to plan and under budget.  As I’ve consistently done, I sought feedback on my own performance, getting a set of key stakeholders together for a review after I had completed my work.  It turned into a love-in! Effusive praise, despite repeatedly asking what I could have done better it seems they thought I was perfect, yet I know at times the programme was on a knife edge and there were definitiely things I could have done better.  I wanted specific feedback to that effect, yet I didn’t get it becasue in the minds of the people involved the outcome masked any short-comings in my performance.

It’s all too common that the result ends in a ‘halo’ or ‘demon’ effect – if you succeed then everything is great, sadly, fail and you’re a catastrophe!  Yet we all know that the margins between success and failure can be slim.  We need to assess our performances honestly, being prepared to celebrate success but always aiming to learn and improve.