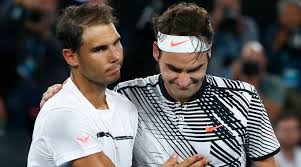 Well, several days after Fed won his 18th grand slam singles title I am still awe struck by the achievement.

Two old codgers got to the final, perhaps aided by early exits of the top two players in the world, Murray and Djokovic.  However, they both had to play some amazing tennis, including numerous, draining, five set matches, only to end up playing a final over five sets with tennis of exceptional quality.

So, how do measure Federer’s achievement?

Nadal is five years younger than Federer, a youthful 30, however, with his recent injury problems he struggled for form and consistency in the second half of last year but found it at the Australian Open, getting to the final.  This is unsurprising, in most sports you would expect players coming back from injury to take time to build form and consistency.

Federer, at 35, is nearly five years older than Nadal.  He hadn’t played a competitive tournament since Wimbledon in mid 2016 – so over six months out, following a knee injury.  He has managed on his return:

All this having just returned to competitive tennis having had six months out. Whatever the quality and experience of Federer, his achievement is remarkable.

History must have weighed heavily on Federer’s mind as Nadal came from two sets to one down and break Fed in the first game of the final set and as he failed to break Nadal in his next two service games, despite having numerous break points.  On a number of occasions in the past Federer had played out of his skin, only for Nadal to get under his skin and come back to win.

Federer persisted in playing positively and pushing, ending with him winning four games in a row from 3-2 down to come back and win the final set and the trophy.

At an age when many players would have settled on their laurels, or hung up their rackets and moved on, Federer is still competing at the highest level.  He has had to continually adapt and innovate – rather than following the trend and stepping back on the court to give himself more time, he has stepped in with the aim of taking time away from his opponents.  In 2015 the sneak attack by Roger appeared (SABR), as he stepped in, using his remarkable racket head control and reading of the serve to attack the serve of top opponents – in the main this was successful, other than in the US Open final of that year, when he encountered an inspired Djokovic, who he had beaten with similar tactics in the previous tournament.  He continues to use the court as well as any player, with a variation and invention matched by no other current player.